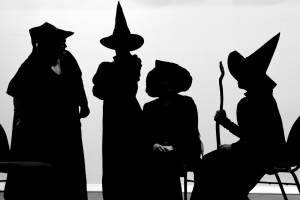 Our three month sojourn in and around Hervey Bay is over. My spell as guest director and writer for the Maryborough Players has ended with the same fun and camaraderie that has typified it from the outset.

My thanks must go to Sir Terry Pratchett, for graciously giving me permission to adapt his wonderful novels for the stage. “Witches Abroad” was the latest, and brought with it an interesting range of challenges.

First and foremost of these, as Discworld readers might expect, was deciding which elements of the novel to keep and which to reluctantly leave on the ‘cutting room floor’. It’s a process I’ve endured before, and for those who are interested in how I approach it I intend to soon start posting elements of my workshop “Playwright: Write! Right?”. That will give you some insights into how I work – if they strike a chord for you I’ll be well pleased.

Some of the physical requirements of putting “Witches Abroad” on stage were a little daunting, but I’ve had two key things in my favour: the excellent facilities of Maryborough’s Brolga Theatre, and my Technical Manager Rob Haigh. Rob’s ability and imagination helped to bring to life moments such as the Duc’s transformation back into a frog, and the moment when a tornado drops a farmhouse onto Nanny Ogg!

All of the cast have brought wonderful depth to their characters in sound, movement and interaction. There’s been exemplary support from the crew – led by rookie Stage Manager Jayne Cronau. Jayne rather landed in the deep end late in the rehearsal period, and it’s been a pleasure to watch how well she’s risen to the challenge of calling a three-hour show with hundreds of cues, keeping her calm and dignity intact!

I’ll miss being a part of the Discworld, but I’ll be back. I have some projects of my own to focus on for a while – you’ll see them here – but the honour of working with the words of a man of such talent is not something I take lightly.

And I’ll be back to The Bay too. (Probably not in summer months if I can help it!) There are too many good people, and good things here for us not to return.